I did it! I finished my first half marathon! And it was the best.feeling.ever!
We arrived in San Diego on Friday afternoon and Saturday we headed to the San Diego Convention Center to check out the race expo and pick up our race packets. We arrived around 12/1 pm and didn't have any problems waiting in lines or dealing with traffic. With over 30,000 participants you can imagine the crowds but we seemed to luck out! We checked out some vendors, did a lil shopping, snagged some free samples and picked up our parking pass. Since we were staying in Ocean Beach (not downtown where the race start was) I was really glad we purchased a parking pass to avoid road closures and the early morning parking issues. The rest of the afternoon was spent having lunch by the ocean, relaxing, and ordering some Italian take-out. 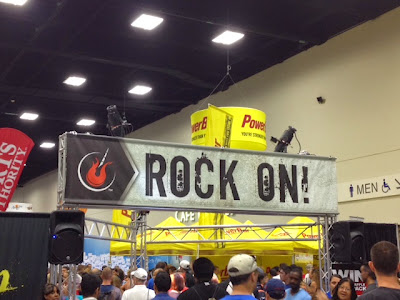 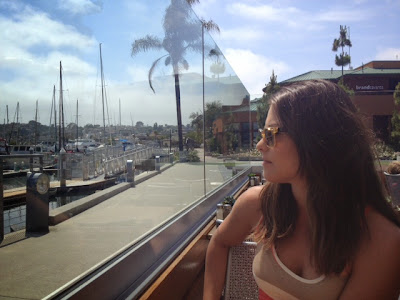 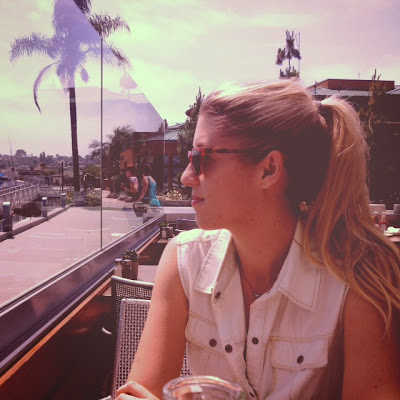 Race morning was finally here! Strangely I wasn't nervous or anxious at all. Just really excited that it was finally happening! My family arrived at 3:45 in the morning (ouch) to pick us up. I was so happy that my mom, sister and niece were able to make the trip for the race. We arrived downtown at about 4 am and made our way to the shuttles. We had to wait in line about 10 or 15 mins and it was kinda chilly. Poor Meg didn't bring any sort of jacket or throw away shirt. :( But after the sun came up it was so nice out and slightly overcast. We made it to the start line with plenty of time to relax, stretch, and use the bathrooms. I was so worried with such an early start time that we may be cutting it close but everything went so smoothly! My family managed to find us among the masses of people and we took some pictures and then at 6:45 am we were off!! 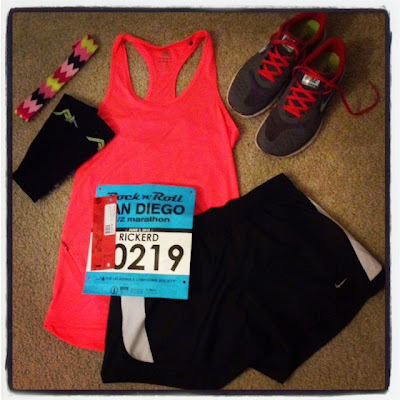 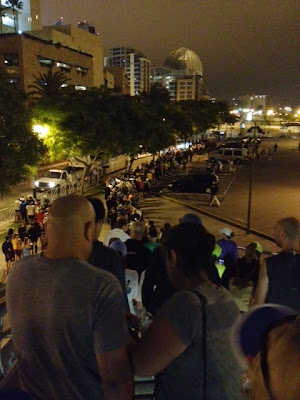 Waiting in line for the shuttle. 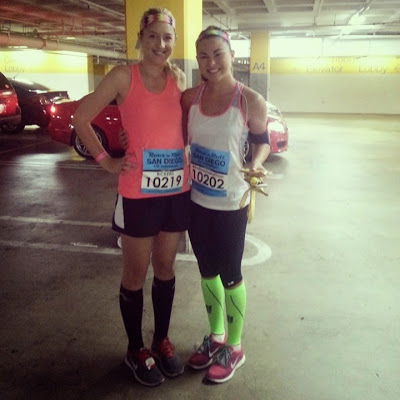 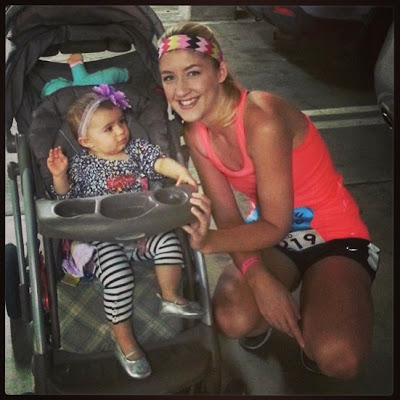 Brinley was such a lil trooper! 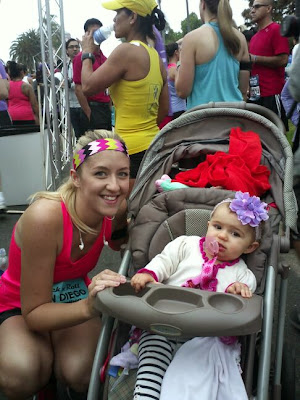 
Meg and I decided beforehand that we would start in the same corral together and then each run our own race. My plan was to start slow and hopefully increase my pace as the race went on. Miles 1-3 were slow (maybe too slow) but I was so happy in the beginning that I actually had to tell myself to knock it off cuz I was already getting emotional about the whole thing! ha! Oh I'm such a sap! But before I knew it, miles were flying by. We made our way through some cute little neighborhoods and through Balboa Park and then ended downtown. The course wasn't as scenic as I'd hoped but I was barely paying attention to my surroundings anyways. There were a few unexpected hills (mile 8 and 11 I remember) but nothing too horrible. I actually was surprised at how awesome I felt the entire time! I took some water at mile 4 and 8...and ate a couple Honey Stingers chews at mile 7 and half a GU gel at mile 8 but never stopped. The end was mostly downhill which was awesome but it was crowded! It was difficult trying to run hard the last couple miles while dodging people. I made it to the finish line feeling fantastic!
2:13:26
I was secretly hoping for 2:10 but since it's my first race I'm happy with how everything turned out. Even though looking back I think I ran it maybe too conservatively. I know I had more in me! But I guess being a newbie you don't really know what to expect. Meg and my sister even teased me at the end, saying it looked like I didn't even break a sweat. It was a learning experience for sure but so much fun! I'm just so happy that I did it. I stuck to my training for 12 weeks, never missed an early Saturday morning run and proved to myself that I could do something I never thought possible a year ago! I'm already looking forward to my next race! 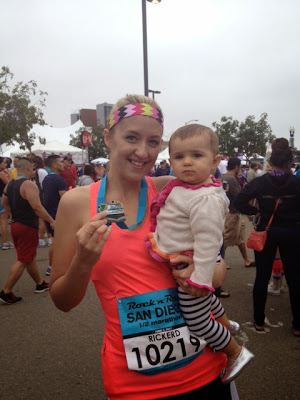 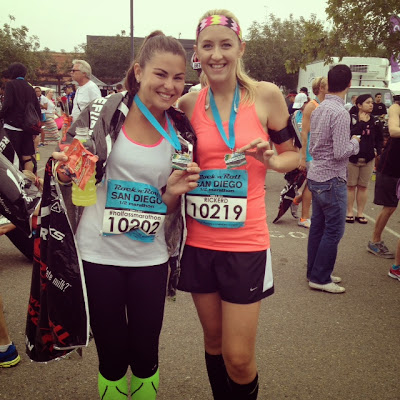 Meg also had an awesome race finishing in 2:01:??
My Nike app splits. 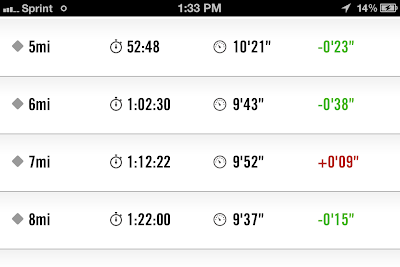 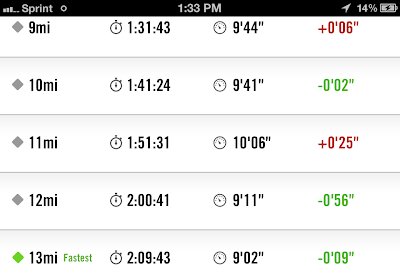 That mile 11 hill screwed up my negative splits. ha. 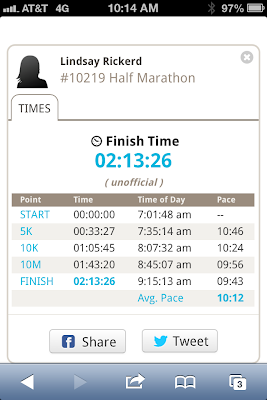 I gotta thank my best friend Nick for all his help with training and being such a great motivator. I felt so well prepared because of him. I definitely wouldn't have been able to do it without him. He was the reason I started running in the first place! And my family of course for making the drive, waking up at ungodly hours and being just as excited as I was about the whole thing! :) Love them!

So congrats if you made it through this entire post! :) Check back later for more to come about our post race fun!

Tell me, have you ever ran a half or full marathon?? Will you do it again?
P.S. Happy National Running Day!
Posted by Lindsay at 12:42 PM